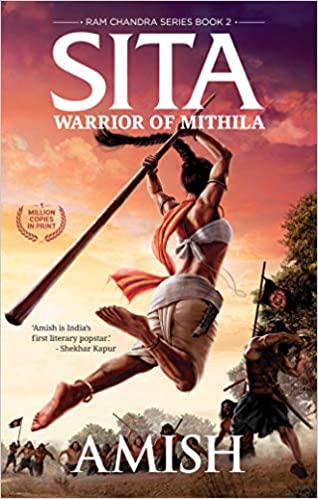 Immerse yourself in book 2 of the Ram Chandra series, based on the Ramayana, the story of Lady Sita, written by the multi-million bestselling Indian Author Amish; the author who has transformed Indian Fiction with his unique combination of mystery, mythology, religious symbolism and philosophy. In this book, you will follow Lady Sita's journey from an Adopted Child to the Prime Minister to finding her true calling. You will find all the familiar characters you have heard of, like Lord Ram and Lord Lakshman and see more of Lord Hanuman and many others from Mithila. You will also start discovering the true purpose of the Vayuputras and Malayaputras and their conflicting ideologies that leads to plot twists, politics and intrigue as they try to influence outcomes from behind the scenes.

She is the warrior we need. The Goddess we await.

She will defend Dharma. She will protect us.

India is beset with divisions, resentment and poverty. The people hate their rulers. They despise their corrupt and selfish elite. Chaos is just one spark away. Outsiders exploit these divisions. Raavan, the demon king of Lanka, grows increasingly powerful, sinking his fangs deeper into the hapless Sapt Sindhu.

Two powerful tribes, the protectors of the divine land of India, decide that enough is enough. A saviour is needed. They begin their search.

An abandoned baby is found in a field. Protected by a vulture from a pack of murderous wolves. She is adopted by the ruler of Mithila, a powerless kingdom, ignored by all. Nobody believes this child will amount to much. But they are wrong.

For she is no ordinary girl. She is Sita.

Continue the epic journey with Amish’s latest: A thrilling adventure that chronicles the rise of an adopted child, who became the prime minister. And then, a Goddess.

This is the second book in the Ram Chandra Series. A sequel that takes you back. Back before the beginning.