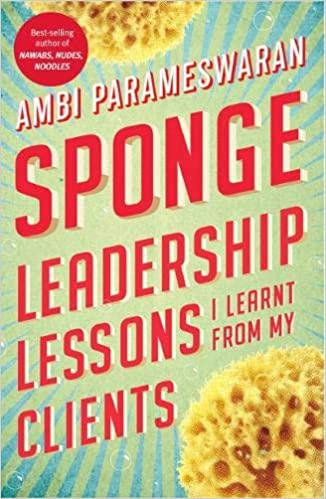 Sponge: Leadership Lessons I Learnt From My Clients

Veteran adman and author AMBI PARAMESWARAN has relied on one process of learning above all others: powerful conversations with clients and customers. A challenging customer, in his view, goes from being someone who poses an obstacle to quality work to someone with eye-opening ideas and concepts. Approached as an exercise in listening and learning, these conversations can become long-term lessons.

Ambi has worked with some of the most respected brands and names in the Indian corporate world, and each of those assignments were for him masterclasses in leadership development. In this book, Ambi recounts conversations with some of the most iconic business leaders, such as Ratan Tata, Azim Premji, S. Ramadorai, Karsanbhai Patel, M. Damodaran, Dr V. Kurien and many others. He soaked up these conversations, in his own words, 'like a sponge’.

This book is an attempt to walk us through some of those dialogues – both the illuminating and the difficult aspects of them – to help us understand how they were learning sessions. For anyone looking at turbocharging their business and career, the ‘Sponge Process’ that emphasises listening is a radical new way of engaging with clients and customers.

M. G. Parameswaran, or Ambi as he is popularly known, is a Brand Strategist and Founder of brand-building.com, a brand advisory. A large part of Ambis illustrious forty-year career was spent in advertising, first at Rediffusion and then a twenty-five year stint at FCB Ulka. He has worked on iconic brands and companies such as Tata, Wipro, Zee, TCS, Thermax, Indica, GSK, Tropicana, Abbott, ITC etc. Ambi now reads, writes, teaches and coaches leaders across multiple domains. He is a guest faculty at IIM, Calcutta and IIM, Ahmedabad and an Adjunct Professor of Marketing at SPJIMR. His columns appear regularly in the Business Standard and the Mint, in addition to other business magazines and dailies. He is a distinguished alumnus awardee of IIT Madras, an alumnus of IIM Calcutta (who served for ten years on its Board of Governors), an AMP graduate from Harvard Business School and a PhD in management from Mumbai University. Ambi can be reached at ambimgp@brand-building.com; he is active on LinkedIn and Facebook as Ambi Parameswaran and on Twitter as @ambimgp.
No Review Found
More from Author