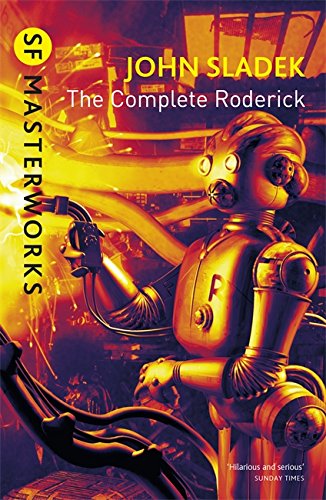 Roderick is a robot and this is his autobiography. Sladek conveys, with great sensitivity and insight the innocence of an artificial intelligence and asks profound questions about mankind's right to manipulate others. It also portrays how a numerological mind might structure a narrative.Inventive, funny yet melancholy this is one of SF's greatest creative geniuses writing at his thought-provoking best.

John Sladek was born in Iowa in 1937 but moved to the UK in 1966, where he became involved with the British New Wave movement, centred on Michael Moorcock's groundbreaking New Worlds magazine. Sladek began writing SF with 'The Happy Breed', which appeared in Harlan Ellison's seminal anthology Dangerous Visions in 1967, and is now recognized as one of SF's most brilliant satirists. His novels and short story collections include The Muller Fokker Effect, Roderick and Tik Tok, for which he won a BSFA Award. He returned to the United States in 1986, and died there in March 2000.
No Review Found