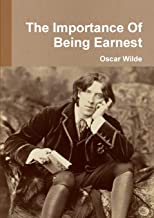 The Importance of Being Earnest

The Importance Of Being Earnest by Oscar Wilde is a wonderful comedy in which the protagonists uphold fictitious personae in order to escape burdensome social obligations. It is hailed as being one of the greatest plays of all-time by one of the worlds best loved authors. This is a classic, presented to you in this modern and up-to-date 2016 edition. A great addition to any book collection