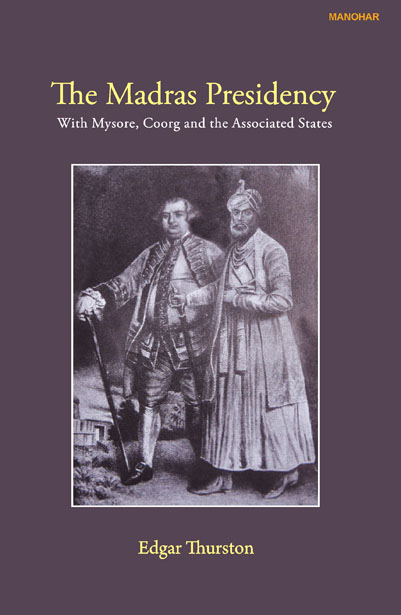 The Madras Presidency: with Mysore, Coorg and the Associated States

Madras Presidency or the Presidency of Fort St George was an administrative subdivision of British India. At its greatest extent, the presidency included most of southern India, including the whole of the Indian states of Odisha, Kerala, Karnataka and the Union Territory of Lakshadweep. The island of Ceylon was also for a time a part of it. First published in 1913, The Mysore Presidency deals with the geography, history, anthropology, administration, industry, produce, chief towns and villages, etc., of this presidency. The author was lent willing help of several friends in this stupendous work. Special mention may be made of S. Gamble of Indian Forest Department on flora and fauna and E.B. Havellon on Architecture. It is part of a series commissioned by the Government of British India on the various presidencies in India.

Edgar Thurston (1885-1935) studied medicine at King’s College, London. He was medical officer in Kent Country Lunatic Asylum and later curator of the museum at King’s College before coming to India to join the Madras Museum in 1885. He has authored several books on Indology including pearl, fishery, coins, ivory carving of southern India, various tribes of southern India, among others.
No Review Found
More from Author