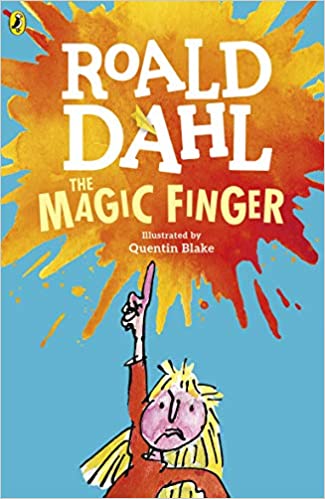 5
0%
0
4
0%
0
3
0%
0
2
0%
0
1
0%
0
Every Saturday morning the Greg family goes off to shoot animals and birds. But the girl who lives next door hates hunting. Now it's made her so angry she's PUT THE MAGIC FINGER ON THEM ALL. And very strange things have begun to happen . . . And now you can listen to THE MAGIC FINGER (with THE MINPINS) and other Roald Dahl audiobooks read by some very famous voices, including Kate Winslet, David Walliams and Steven Fry - plus there are added squelchy soundeffects from Pinewood Studios! Also look out for new Roald Dahl apps in the App store and Google Play- including the disgusting TWIT OR MISS! and HOUSE OF TWITS inspired by the revolting Twits.

Roald Dahl (Author) Roald Dahl was a spy, ace fighter pilot, chocolate historian and medical inventor. He was also the author of Charlie and the Chocolate Factory, Matilda, The BFG and many more brilliant stories. He remains The Worlds Number One Storyteller. Quentin Blake (Illustrator): Quentin Blake has illustrated more than three hundred books and was Roald Dahls favourite illustrator. In 1980 he won the prestigious Kate Greenaway Medal. In 1999 he became the first ever Childrens Laureate and in 2013 he was knighted for services to illustration.
No Review Found
More from Author