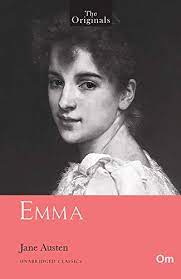 “Time will generally lessen the interest of every attachment not within the daily circle.” Emma Woodhouse, a headstrong, beautiful and witty twenty-year-old resident of the village of Highbury, is overconfident about her matchmaking skills. Conjuring successful love matches is an art she thinks she has mastered—especially after her self-proclaimed accomplishment at finding Miss Taylor, her governess, a suitable partner in Mr. Weston, a village Widower next, she takes it upon herself to find a perfect match for her friend Harriet Smith. She even convinces her to refuse the proposal of Robert Martin, a well-to-do farmer. While Harriet cannot deny her feelings for Mr. Martin, Emma wishes her friend to be a gentleman wife. Mr. Knightley, Emma’s brother-in-law, observes Emma’s matchmaking efforts and is contemptuous of her meddling. What follows in this circuit of misconstrued romances is a series of conflicts, misunderstandings and suspicions. Is Emma overestimating her ability as a matchmaker or Mr. Knightley being unnecessarily critical of her motive? Emma (1815) was Jane Austen last novel to be completed and published during her lifetime.