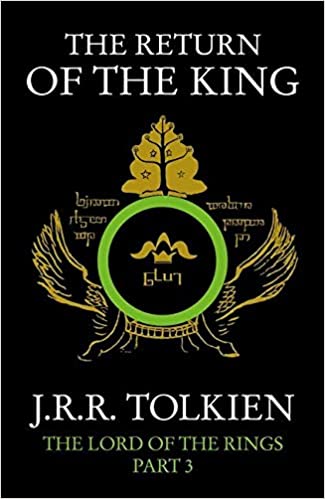 The Return of the King

Concluding the story begun in The Hobbit, this is the final part of Tolkien’s epic masterpiece, The Lord of the Rings. Featuring a striking black cover based on Tolkien’s own design, the definitive text, and a detailed map of Middle-earth.

The armies of the Dark Lord are massing as his evil shadow spreads ever wider. Men, Dwarves, Elves and Ents unite forces to do battle agains the Dark. Meanwhile, Frodo and Sam struggle further into Mordor in their heroic quest to destroy the One Ring.

Impossible to describe in a few words, JRR Tolkien’s great work of imaginative fiction has been labelled both a heroic romance and a classic fantasy fiction. By turns comic and homely, epic and diabolic, the narrative moves through countless changes of scene and character in an imaginary world which is totally convincing in its detail. Tolkien created a vast new mythology in an invented world which has proved timeless in its appeal.

John Ronald Reuel Tolkien was born on the 3rd January, 1892 at Bloemfontein in the Orange Free State, but at the age of four he and his brother were taken back to England by their mother. After his father’s death the family moved to Sarehole, on the south-eastern edge of Birmingham. Tolkien spent a happy childhood in the countryside and his sensibility to the rural landscape can clearly be seen in his writing and his pictures.
No Review Found