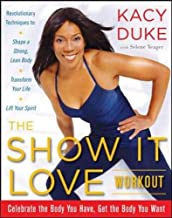 The Show It Love Workout

Get fit from the inside out!

No goal is unattainable when you follow the revolutionary, three-part plan designed by celebrity trainer Kacy Duke. Achieve the lean, strong body you've always dreamed of while also learning to show some love for the thighs and hips that have taken you this far in life. Using Kacy's “I Am (the mind-set), I Can (the motivation), and I Do (the movement)” approach, you will be able to:


Without respect for your body, without the ability to Show It Love, any exercise and diet program is doomed to fail. Once you have built a strong foundation of loving and respecting your body, you will be able to gain the confidence needed to achieve lean, gorgeous body lines you never thought possible--without even stepping foot in a gym. Honor your body, and it will give back to you tenfold.

"[Kacy] Duke, a personal trainer to celebrities like Kirsten Dunst, Denzel Washington, and Julianne Moore, has crafted an inspirational volume to help women "celebrate the body you have, get the body you want." . . . Women will appreciate her emphasis on sense of self; the point here is to realize the potential of one's individual physique, not aim for an unattainable Hollywood ideal. . . . Highly recommended ."
--Library Journal starred review

Celebrity fitness trainer and cofounder of Equinox Fitness Clubs Kacy Duke has made some of the most famous people in the world red-carpet ready, including Julianne Moore, Kirsten Dunst, Denzel Washington, Iman, Bruce Willis, Lenny Kravitz, and Mary J. Blige. She was chosen by New York magazine as one the city's top workout gurus; has appeared on national television, including "Good Morning America" and "20/20"; and has been featured in Fitness, O, and Vogue, among many other magazines. Selene Yeager is a top-selling health and fitness writer. Her work has appeared in Shape, Fitness, Women's Health, O, Good Housekeeping, and Cosmopolitan.
No Review Found