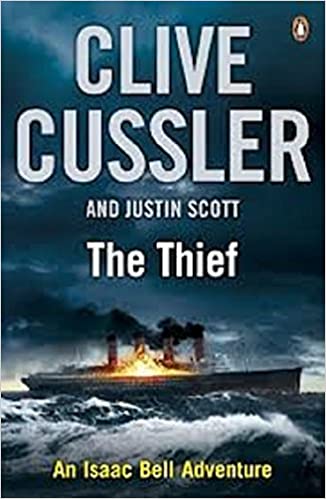 The Thief : An Isaac Bell Adventure

The Thief is Clive Cussler's fifth historical thriller featuring detective Isaac Bell.A bold kidnapping aboard an ocean liner sends detective Isaac Bell across America in a deadly game of cat and mouse . . .Leaving England aboard the liner Mauretania, Isaac Bell, chief investigator at the legendary Van Dorn Detective Agency, stumbles on and thwarts a kidnapping. The two victims, who have fled Europe carrying a secret invention, fear that a foreign power wishes to steal it before they can bring it to America.Bell and the Van Dorn Agency offer to protect them.And it isn't long before Bell is fighting skullduggery in the middle of the Atlantic. In New York City, as well as across the country as he and the inventors head for California, the deadly chase is on. On their trail is the murderous agent known only as the 'Acrobat', instructed to steal this world-changing invention - and kill anyone in his way . . .Bestseller Clive Cussler - author of the Dirk Pitt novels Crescent Dawn and Atlantis Found - has legendary super-sleuth Isaac Bell protect a top-secret invention with the power to shape the course of history. The Thief is the fifth novel in the Isaac Bell series, following The Race.

Clive grew up in Alhambra, California. He joined the US Air Force before going on to a successful advertising career. Now a bestselling author he has explored the deserts of American South-West in search of lost gold-mines, dived in isolated lakes in the Rockies looking for missing aircraft and hunted under the sea for shipwrecks of historic significance, discovering and identifying more than sixty. Like the famous hero, Dirk Pitt, from his adult books, Clive is an avid enthusiast of classic cars. Clive divides his time between Denver, Colorado and Paradise Valley, Arizona USA.

Justin Scott is the author of twenty-six novels, including The Shipkiller and Normandie Triangle, the Ben Abbot detective series, and five modern sea thrillers under his pen name Paul Garrison. He currently co-writes the Isaac Bell series with Clive Cussler. He lives in Connecticut.
No Review Found
More from Author