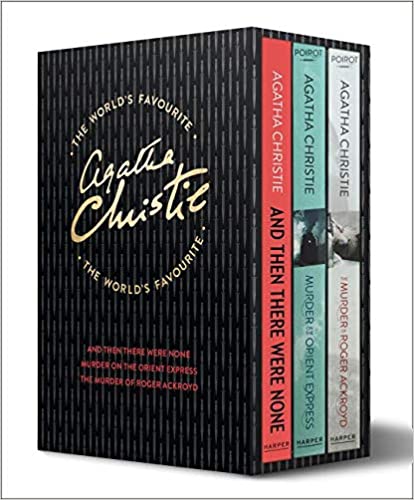 The World's Favourite: And Then There Were None, Murder on the Orient Express, The Murder of Roger Ackroyd - Box set

5
0%
0
4
0%
0
3
0%
0
2
0%
0
1
0%
0
A boxed set of the three books that have been are one of the World’s Favourite Agatha Christie novels. The box contains the bestselling books ‘And then there were none’, ‘Murder on the Orient Express’ and ‘The Murder of Roger Ackroyd’. And Then There Were None was Agatha Christie’s most popular book. With more than 100 million copies sold internationally, it is also the best crime novel of all time. It is Called ‘Agatha Christie’s masterpiece’ by the Viewer and the ‘most baffling mystery Agatha Christie has ever written’ by the New York Times, it was especially difficult to write. Christie said she loved it for its ‘difficult technique which was a challenge’. The other two books see the Belgian detective Hercule Poirot facing two of his most exciting cases. In Murder on the Orient Express, an American millionaire dies of numerous stab injuries on a snowbound train bound for Paris. The second case is The Murder of Roger Ackroyd, a rich widower is wounded to death in his study. All these books are exceptionally well written, with a gripping plot which keeps the readers engrossed in the book.