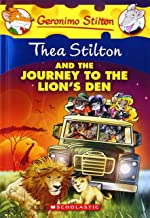 Thea Stilton and The Journey to The Lions Den

5
0%
0
4
0%
0
3
0%
0
2
0%
0
1
0%
0
Join Thea Stilton and the Thea Sisters on this adventure packed with mystery and friendship! The Thea Sisters are in Kenya on a photo safari! The mouselets love exploring the magnificent landscape and learning about the animals on the reserve they're visiting. A lion cub has just been born -- but while they're there, he's kidnapped! It's up to the Thea Sisters to rescue him in an adventure across the savanna.