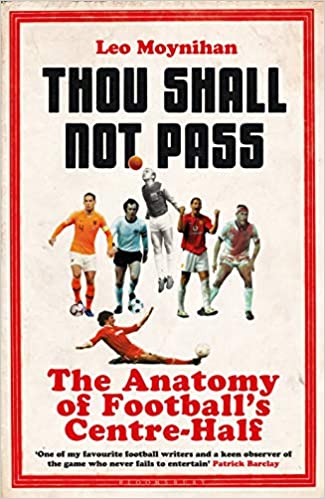 Thou Shall Not Pass: The Anatomy of Football’s Centre-Half

Football is often romanticised as 'The Beautiful Game'. If true then the game's centre-half might be considered as the unsightly pimple on the end of its otherwise perfectly formed nose. The stopper, the last line of defence, the big man with small ideas. The lump who lumps it.Thou Shall Not Pass (the title comes from a command England captain Terry Butcher would shout before every match) celebrates the football position where brutal characters are loved for their hard-hitting tackles and bruising mentality and yet laughed at for their apparent lack of skill.As well as covering the long and illustrious history of the centre-half, the book will take the reader into the muddy penalty area frequented by our protagonists, into their domain. The places they head the ball, the places they tackle, the places in which they will stop at nothing to stop a forward. What makes them approach the game the way they do? What makes them different from those whose sole purpose is flair?Rich with amazing anecdotes, the book explore all aspects of the position and delve into the mentality of those who ply their trade there: what makes a player willing to put his face in the way of danger, how have tactics governed the role over the decades and what dark arts centre-halves must master in order to stop their foes.

Leo Moynihan has been a sportswriter for 20 years. He has written for The Times, Four Four Two, the Sunday Telegraph, Shortlist, Evening Standard and Esquire, among others. He has written several books on football, including a ghosting project with David Beckham, a biography of Gordon Strachan which earned him a nomination for Best New Writer in the British Sports Book awards.
No Review Found