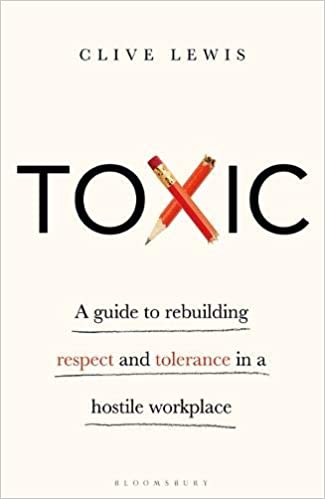 Toxic: A Guide to Rebuilding Respect and Tolerance in a Hostile Workplace

The workplace has become a hotbed of social toxicity - from the #MeToo movement to WeWork, it's clear that abusive bosses and entrenched cultures of discrimination have become more prevalent than ever. Such behaviour is not only simply wrong and damaging to its victims - it also results in reduced productivity, higher employee turnover, and can often leave a stain upon the wider reputation of an organization.In Toxic, Clive Lewis draws upon his decades of experience in HR and mediation to distill the problems and underlying causes of toxic workplaces before tackling the issue head-on. He draws upon first-hand case studies from an eclectic array of workplaces (from corporate offices to hospitals) to demonstrate how toxicity can be both prevented and resolved. This is a practical guide for business leaders and HR professionals looking to preserve a peaceful workplace, while also providing tips for employees looking to remain productive and focused when working with troublesome colleagues in difficult environments.

Clive Lewis is a business psychologist specialising in individual, team and organisation behaviour. He is one of the UK's most sought-after mediators, and is the founder and Chief Executive of Globis Mediation Group. He has worked with executive teams and governments for over 20 years and is the author of seventeen books. He was awarded an OBE in 2011 for public service and his contribution to the field of workplace mediation. He chaired the panel which produced the government-backed Reach report following the untimely death of Stephen Lawrence. He was appointed as Deputy Lieutenant of Gloucestershire in 2012. He serves as a non-executive director in the NHS and is Deputy Chair at the University of the West of England. In his spare-time he is a professional bass guitar player.