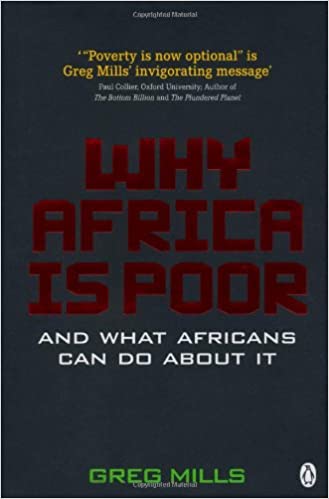 Why Africa Is Poor: And What Africans Can Do About It?

Why Africa is Poor looks at the fragile economic and political situation in Africa and makes the quite controversial argument that the main reason why Africa's people are poor is due to the choices made by their leaders.

Dr Greg Mills draws extensively from his experiences running various presidential-level advisory teams across the continent and examines the policy choices that have stunted African development.
In providing some answers to the conundrum of development, the book focuses on the way in which the global economy works, Africa's record and the choices made by its leaders, the role of the outside world and the global aid regime. It assesses whether the odds are in Africa's favour and
identifies the areas where African leadership could make better choices.

Dr Greg Mills currently directs the Johannesburg-based Brenthurst Foundation, established by the Oppenheimer family in 2005 to strengthen African economic performance. During 2006 he served as head of the 'Prism' strategic analysis cell and special adviser to the Commander of the Ninth International Security Assistance Force based in Kabul, and in 2008 was seconded to the government of Rwanda as strategic adviser to the president. During 2009 he served as a member of the Danish Prime Minister's Africa Commission, and was a visiting scholar at the Centre for African Studies at Cambridge University. From 1996-2005 he was national director of the South African Institute of International Affairs.
No Review Found