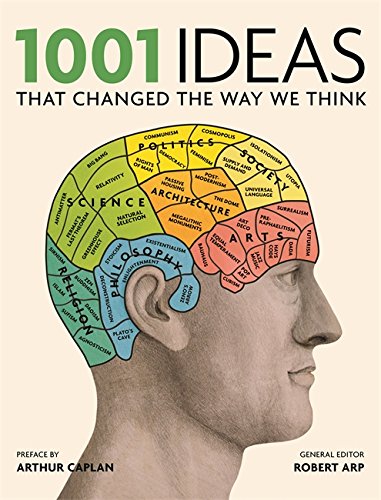 1001 Ideas that Changed the Way We Think

An awe-inspiring overview of the development of human knowledge over the centuries! Part of the highly successful '1001' series which have sold over a million copies in the UK alone 1001 Ideas That Changed The Way We Thinkoffers not only a comprehensive history of ideas, but also an eminently browsable source of amusement. This richly informative and entertaining book provides a wide variety of answers to those eternal questions such as...How was the universe created and what is the place of humans within it? How should a person live? And how can we build a just society? Readers will discover how the Greek philosopher Zeno 'proved' a flying arrow never moves and the mathematical proof of the existence of life in other galaxies. The inspiring ideas explored range from Gandhi's theory of civil disobedience to Mary Wollstonecraft's groundbreaking advocacy of women's rights. A wide variety of cultural movements are also covered, including Neoclassicism, Surrealism and Postmodernism. Drawing of a wide spectrum of topics including politics, cosmology, the arts, philosophy and religious beliefs, 1001 Ideas That Changed The Way We Thinktraces the exponential growth of human knowledge across the centuries. Ranging from the ancient wisdom of Confucius and Plato, to the cutting-edge theories taking shape in the twenty-first century, this book offers a wealth of stimulation and wit for any reader with a lively and curious mind.

Robert Arp is Adjunct Professor of Philosophy at Maple Woods College and Johnson County Community College, in the Kansas City area. He has attained a PhD in Philosophy from Saint Louis University, and specializes in the philosophy of biology, the philosophy of mind, and modern philosophy. A member of The American Philosophical Association and The Philosophy of Science Association, Robert Arp has written numerous articles, book chapters, and books, and is the editor of South Park and Philosophy (Blackwell Publishing, 2006), the co-editor of Contemporary Debates in Philosophy of Biology (Wiley-Blackwell, 2009), and the author of An Integrated Approach to the Philosophy of Mind (Cambridge University Press, 2010). In 2013 he was general editor of 1001 Ideas That Changed The Way We Think. See his website at robertarp.com
No Review Found