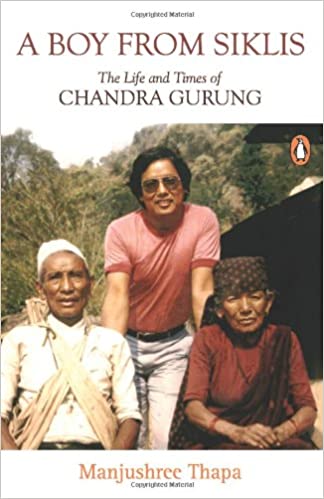 In the last days of the monsoon in 2006, a helicopter crash in Nepal’s eastern hills claimed some of the country’s best, including the charismatic environmentalist Chandra Gurung. Starting with his birth as the son of the headman of the small village of Siklis, Manjushree Thapa follows the arc of his career as he achieved one democratic breakthrough after another in a conservation movement under royal patronage, where the royal family expected environmentalists to pander to their every whim. Offering a historical view into Nepal’s conservation movement as a whole, A Boy from Siklis is the portrait of one man, of his times, and of a nation made and unmade—and made anew—by its quest for democracy.

Manjushree Thapa grew up in Nepal, Canada and the United States. She began to write upon completing her BFA in photography at the Rhode Island School of Design. Her first book was Mustang Bhot in Fragments (1992). In 2001 she published the novel The Tutor of History, which she had begun as her MFA thesis in the creative writing program at the University of Washington in Seattle, which she attended as a Fulbright scholar. Her translation of Indra Bahadur Rai's there’s a Carnival Today won 2017 PEN America Heim Translation Grant. Her best known book is Forget Kathmandu: An Elegy for Democracy (2005), published just weeks before the royal coup in Nepal on 1 February 2005. The book was shortlisted for the Lettre Ulysses Award in 2006. After the publication of the book, Thapa left the country to write against the coup. In 2007 she published a short story collection, Tilled Earth. In 2009 she published a biography of a Nepali environmentalist: A Boy from Siklis: The Life and Times of Chandra Gurung. The following year she published a novel, Seasons of Flight. In 2011 she published a nonfiction collection, The Lives We Have Lost: Essays and Opinions on Nepal. Her latest book, published in South Asia in 2016, is a novel, All Of Us in Our Own Lives. She has also contributed op-eds to the New York Times.
No Review Found
More from Author