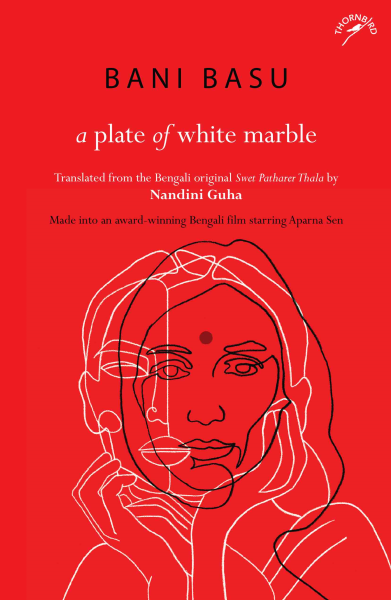 A Plate of White Marble

First published in 1990 in the original Bengali, A Plate of White Marble tells the tale of the ‘new woman’ of an era that just witnessed the independence of a nation. Bandana, the protagonist, though grieves over her husband’s early death, never conforms to the social connotation and ideals of ‘widowhood’, thanks to her uncle. She dares to begin her life afresh in every possible sense. But naturally, the road proves to be full of thorns as she gradually faces bitterness from many quarters of the society. The only thing she clings to is her son,  but once that anchor too is lost, she leaves behind the safe concrete walls of what she used to consider ‘home’, only to work for a far greater cause—she joins a children’s home  to work for those who need her the most.

This first translation brings a significant Bengali novel with important social concerns to a wider audience.

Bani Basu is one of the most versatile contemporary writers in Bengali. An eminent academician, poet, novelist, essayist, critic and translator, Basu writes on diverse topics ranging from history and mythology to society, psychology and gender. She received her formal education from Lady Brabourne College, Scottish Church College and University of Calcutta, where she earned a masters degree in English. She served as a lecturer and later, as the Head of the Department of English at Bijoy Krishna Girls College, Howrah. Her translations of Shri Aurobindo’s poems and two volumes of Somerset Maugham’s stories and one volume of D.H Lawrence’s stories won a wide readership. She started her career as an original author with the publication of the novel, Janmabhumui-Matribhumi in 1980. Her well-known novels include Antarghat (The Enemy Within), Maitreya Jatak (The Birth of Maitreya), Kharap Chhele (Dark Afternoons), Swet Patharer Thala and Pancham Purush. Bani Basu has won a number of awards including Tara Shankar Award (1991), Shiromani Purashkar (1997), Ananda Purashkar (1998), Katha Award (2003) and Sahitya Akademi Award (2010). A number of her stories have benn adapted into films and TV serials.
No Review Found