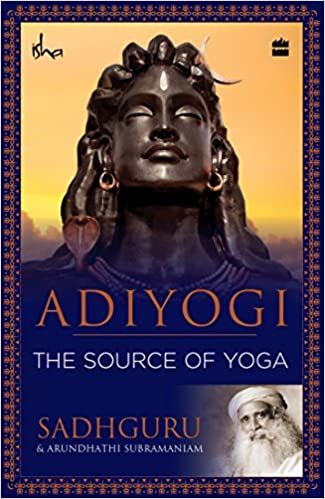 Adiyogi : The Source of Yoga

Shiva does not spell religion. Shiva spells responsibility- Our ability to take our very life process in our hands. Shi-va is that which is not a primordial emptiness, Shiva is also the frist-ever yogi, Adiyogi, the one who frist preceived this emptiness. Adiyogi is symbol and myth, historic figure and living presence, creator and destroyer, outlaw and ascetic, cosmic dancer and passionate lover, all at once.

A book like no other, this exraordinary document is a tribute to Shiva, the Adiyogi, by a living yogi, a chronicle of the progenitor of mysticism by a contemporary mystic. Here science and philisophy merge seamlessyly, so do silience and sound, questio and answer- to capture the unspeakable enigma of Adiyogi in a spellbinding wave of words abd ideas that will leave one entranced, transformed.

Sadhguru Jaggi Vasudev is an Indian yogi and mystic.He is the founder of Isha Foundation which administers yoga centers around the world, including India and the United States. Jagadish Vasudev was born in Mysore, Karnataka. At the age of twenty-five he had a spiritual experience, and subsequently established Isha Foundation, a non-religious, not-for-profit organization. The Isha Yoga Center near Coimbatore was founded in 1992, and hosts a series of programs intended to heighten self-awareness through the practice of yoga. He was a delegate to the United Nations Millennium World Peace Summit - and a participant at the World Economic Forum in 2006, 2007, 2008 and 2009.Vasudev built the Dhyanalinga yogic temple in 1999. He also heads the Project Greenhands initiative to plant 114 million saplings to increase the existing tree cover of Tamil Nadu. The project entered the Guinness Book of World Records for planting the maximum number of tree saplings on a single day. Vasudev was a participant in the 2006 documentary film ONE: The Movie.
More from Author