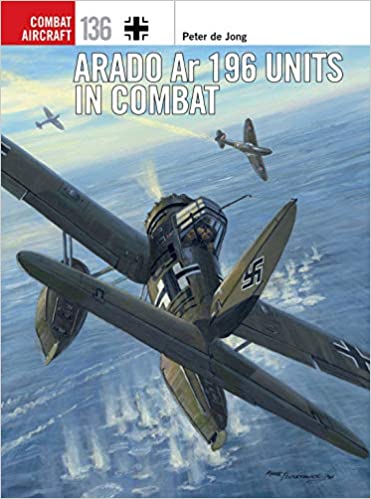 Beating its biplane rivals in a 1936 Reich Air Ministry design competition, the Arado Ar 196 provided the Kriegsmarine with possibly the best shipborne reconnaissance seaplane of World War II. Replacing the Heinkel He 60 biplane as the standard catapult-launched floatplane embarked on the Kriegsmarine's capital ships, the Ar 196 flew an assortment of combat missions during World War II, including coastal patrol, submarine hunting, light bombing, general reconnaissance and convoy escort sorties. The first vessel to take its Ar 196A-1s to sea was the pocket battleship Graf Spee, which embarked two in the autumn of 1939. The battleships Bismarck and Tirpitz could carry six Arados each, the battlecruisers Gneisenau and Scharnhorst four and smaller pocket battleships and cruisers two. Shore-based aircraft were also operated from coastal ports on the Channel, Baltic, North Sea and Bay of Biscay coasts, as well as in the Balkans and Mediterranean.In this title, supported by an excellent selection of photographs and full-colour illustrations, Peter de Jong explores the history of the Arado Ar 196, detailing their development and assessing the combat capabilities of one of the last fighting seaplanes.

A professional editor and translator, Peter de Jong has collaborated on numerous modern history and aviation history books, and written several books of his own and dozens of magazine articles since 1995. For Osprey he covered the Dornier Do 24 flying boat and the Fokker D.XXI fighter.

Janusz Swiatlon lives in Krakow, Poland. A veteran of service with the Polish Army's 6th Pomorska Dywizja Powietrzno-Desantowa (an airborne unit) in the 1980s, he is both an enthusiast of aviation historian and a military modeller. As an illustrator, he has created numerous colour aircraft profiles published in magazines and books by AF Editores, Kagero, Chevron, Stratus and other publishing houses, including Osprey.

Mark Postlethwaite was born in Leicestershire in 1964 and has developed a lifelong passion for aviation history. He first worked as a photographer before turning his attention solely to artwork, and is now highly regarded in his field for the quality and accuracy of his work. He became the youngest elected member of the Guild of Aviation Artists in 1991. Mark is a valued Osprey artist and has contributed to more than 100 of its books.
No Review Found