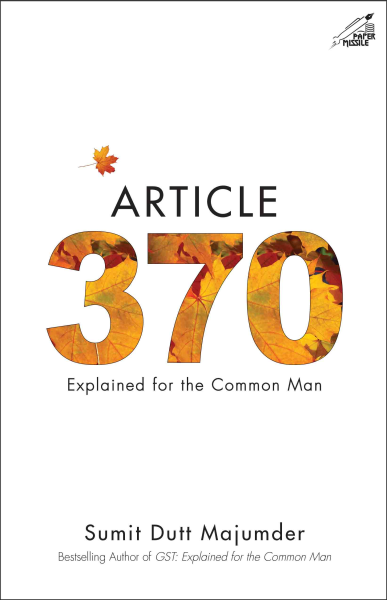 Article 370: Explained for the Common Man

In August 2019 the Government of India reconstituted the erstwhile state of Jammu and Kashmir into two union territories, Jammu & Kashmir and Ladakh, with effect from 31 October 2019. Previously, Article 370 of the Constitution of India had granted the state of Jammu & Kashmir a special status. This special status was abrogated and the state more closely integrated into the Indian union, with the passing of the Jammu and Kashmir Re-organisation Act, 2019, by both houses of the Indian Parliament. This book seeks to clarify the issues surrounding Article 370 and 35A of the Indian Constitution, thus making readers more informed about this important constitutional, political and legal matter. The beauty of Article 370: Explained for the Common Man lies in the fact that the author writes in a simple and lucid language, avoiding journalese, jargon and legalese, thereby making the issues accessible to the common man.

Sumit Dutt Majumder, former Chairman, Central Board of Excise and Customs, joined the Indian Revenue Service in 1974, after his Masters in Physics from IIT Kharagpur. As Member (Central Excise) and then Chairman, CBEC, he was actively associated with the preparations for GST. He has been interacting with the trade across the country explaining the basics of GST. He presented his views to the Select Committee of Rajya Sabha on the GST Constitution Amendment Bill. On invitation, he interacted with Members of Parliament on GST. As Senior Advisor, International Tax and Investment Center, Washington, he has been addressing Asia Pacific Tax Forum and African Tax Dialogue on GST in India. The European Union (EU) appointed him for its project in India on Capacity Building in GST. He is the author of a book on customs valuation and two more books on GST.