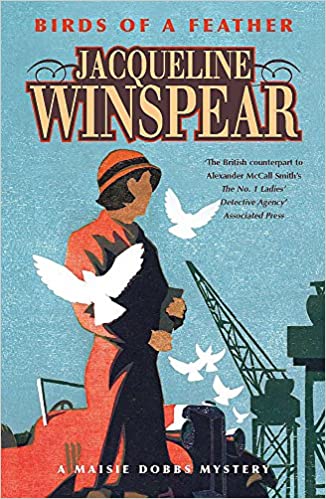 'A terrific mystery . . . Both intriguing and full of suspense' Observer

London, 1929. Joseph Waite is a man who knows what he wants. With his Havana cigars and Savile Row suits, he is one of Britain's wealthiest men. And the last thing he needs is a scandal. When his unmarried daughter runs away from home, he is determined to keep the case away from the police and the newspapers. So he turns to a woman renowned for her discretion and investigative powers - the extraordinary Maisie Dobbs.

Maisie soon discovers that there are many reasons why Charlotte Waite might have left home and instinctively feels the women is in safe hands. Yet the investigator suddenly finds herself confronting a murder scene.

With wonderful characters and a page-turning plot, Birds of a Feather is a brilliant mystery. Fans of Maisie Dobbs will be delighted to see Maisie's sleuthing abilities back in action, while the emotional heart of her second mystery will appeal to yet more fans.

Jacqueline Winspear is the creator of the New York Times and National Bestselling series featuring psychologist and investigator, Maisie Dobbs. Her first novel - Maisie Dobbs - received numerous award nominations, including the Edgar Award for Best Novel and the Agatha Award for Best First Novel. It was a New York Times Notable Book and a Publisher's Weekly Top Ten Pick. Since that time, Jacqueline's work has received many award nominations, and she has received the Agatha Award twice, the Macavity Award, the Alex Award, the Sue Feder Award for Best Historical Novel and the Bruce Alexander Award for Best Historical novel. Her 'standalone' novel set in WW1, The Care and Management of Lies, was a finalist for the Dayton Literary Peace Prize in 2015.
No Review Found