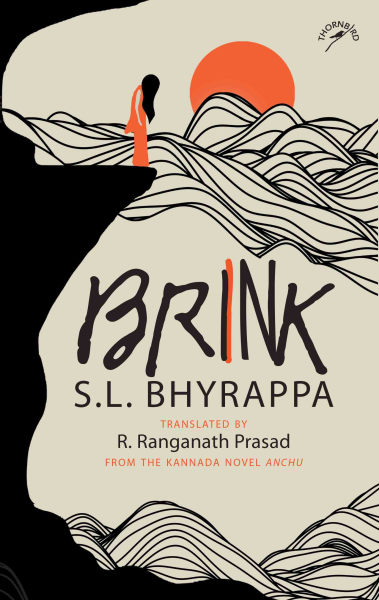 The English translation of the epic Kannada novel Anchu by the renowned author S.L. Bhyrappa, Brink is a love saga between Somashekhar, a widower, and Amrita, an estranged woman. The novel deliberates on the moral, philosophical, and physical aspects of love between a man and a woman. At the core of the story is compassion, and Somashekhar is the very personification of compassion. He brings love and warmth into Dr. Amrita’s melancholic life. But time and again, she loses her temper and undergoes swift mood changes. In such times, she inflicts pain and torture on Somashekhar in spite of his sincere love for her. Will Somashekhar be able to help her overcome depression by his perseverance and sacrifice? An enthralling read, the novel has stood the test of time like Bhyrappa’s other novels. Packed with internal drama, tension, and flashbacks, the book promises to impart an aesthetic experience to the reader.

S L Bhyrappa is a Kannada novelist, whose works are immensely popular both within and beyond Karnataka. Widely regarded as one of Indiaâ€™s foremost writers, his novels are unique in terms of theme, structure, and characterisation. Recipient of â€˜Saraswathi Sammanâ€™ for Mandra, Bhyrappa has the honour of receiving many other awards as well. His novels are translated into almost all Indian languages including Sanskrit and English.
No Review Found