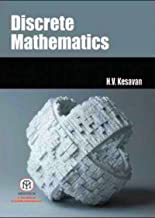 The book Discrete Mathematics comprises of 16 topics, Set theory, Relations, Functions, Permutations and Combinations, Binomial theorem, Circular Permutations, Mathematical Induction, Number system, Binary system, Groups, Rings, Graph theory, Probability, usefull for the students of engineering M.C.A., B.C.A.,  B.Sc.,  Computer science of Indian Universities. The book is prepared in a lucid style keeping in mind even the average students can understand each content in every topic without  ambiguity. It is also very useful  reference   book for students appear for national level competitive examinations and teachers can refer this book for their line of activity. The book is prepared as per the syllabus of V.T.U., Belgaum, Karnataka, and also covered the topics of all the other Indian Universities. Problems of various Indian universities examinations papers have been solved so that the students get an idea to prepare themselves for their examination. Several problems have been left as an exercise for the students to solve and get confidence  about the subject. This book will be an useful reference book both for students and for teachers not only from the examination point of view but also for application for their higher level studies.

Prof Keshavan was born in Mysore and brought up in Bangalore, Capital of Karnataka State in India. He obtained his masters degree in Applied Mathematics from Bangalore University in 1979. As passionate towards of gaining knowledge in other fields , he received the degree in law from the same university, M.B.A. in Computer Application from deemed university A.I.U.M.T. (W.A.U.C.), California, diploma in Computer Science from Poona based institution. He is a great ambitious teacher, trained and coached numerous students from twelfth standard to degree in science and engineering and to various other courses in Mathematics and Mathematics related topics for more than three decades. To his credit he served as Principal and Director of the Educational Institutions affiliated to Bangalore University and as Professor, Department of Mathematics in Engineering and Technology Colleges coming under Visvesvaraya Technological University popularly called as V.T.U., Belgaum, Karnataka State. Prior to his academic line of activity he served in Industries for twelve years. During this period he prepared an IPP project report entrusted to him by Govt. of Karnataka towards the requirement of infrastructural facilities in family welfare measure, which come under Govt. of India and World Bank aid. He is the recipient of â€œNational Excellence Awardâ€ (organized by NRI welfare society of India), â€œJewel of India Awardâ€ 2002 (organized by International Business school), â€œLife time achievement awardâ€ 2003, (organized by International Institute of education and Management). He is the author of Higher Engineering Mathematics useful reference book for U.G., P.G., courses and major mathematics students of Indian Universities.
No Review Found