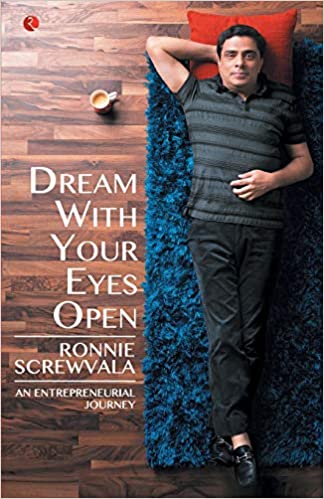 Dream with your Eyes Open: An Entrepreneurial Journey

In Dream With Your Eyes Open, first-generation entrepreneur and UTV-founder Ronnie Screwvala details his vast experiences and the myriad lessons learnt from more than two decades of building some successful (and some not-so-successful) businesses, bringing clarity to a quickly changing business landscape and making an impassioned case for the role of entrepreneurship in India's future. If you’ve ever had an impactful, disruptive product or business idea, been curious about owning your own business, or have already taken the first steps on your entrepreneurial journey, this is the book for you. If you’ve been running your own company for the last seven-odd years, and scale, brand and value-creation are some of the crossroads for you now, keep reading.If you think your parents or family would freak out if you dared to suggest ditching your safe haven—your professional job—to pursue your dreams of owning your own business, relax. Better yet, share this book with them.If you’re an experienced professional ready to take the plunge into starting your own business or committed to growing into an effective leader in the company you work for, read on. This book hopes to demystify failure, inspire success, raise ambitions and help you think big.Dream With Your Eyes Open shares failures and triumphs, thoughts and anecdotes in a simple narrative that could help you gain better insights into entrepreneurship and give you a fighting chance when it comes to realizing your dreams in a David-versus-Goliath world. Only then will we succeed in harnessing the country’s enormous entrepreneurial potential with the most energetic and passionate people in the world, alive with fresh mind-sets, optimism and hope.This book is about ‘it can be done’, not ‘I did it’. It’s all possible. Just dream your own dream—and when you do, dream with your eyes open.

From modest beginnings in Mumbai’s Grant Road, surrounded by the energy and unbridled potential of a country always on the verge of greatness, Ronnie Screwvala is a first-generation entrepreneur. His early days, in front of the camera and on stage, inspired him to pioneer cable TV in India, and build one of the largest toothbrush manufacturing operations before starting UTV, a media and entertainment conglomerate spanning television, digital content, mobile, broadcasting, games and motion pictures, which he divested to The Walt Disney Company in 2012. Newsweek termed him the Jack Warner of India, Esquire rated him as one of the 75 Most Influential People of the 21st Century and Fortune as Asia’s 25 Most Powerful. On to his second innings, Ronnie is driven by his interest in championing entrepreneurship in India, and is focused on building his next set of ground-up businesses in high growth and impact sectors. His more recent commitment to being a first mover in sports has made him lend his support to kabaddi and football. He is passionate about social welfare and, with his wife Zarina and through their Swades Foundation, has given single-minded focus to empowering one million lives in rural India every 5-6 years through a unique 360-degree model. He lives in Mumbai with Zarina and daughter Trishya.
No Review Found