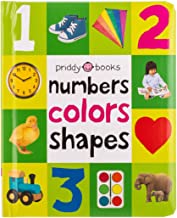 5
0%
0
4
0%
0
3
0%
0
2
0%
0
1
0%
0
Your young chld will soon learn their first numbers, shapes and colors with this bright board book from Priddy Books. There are 100 color pictures which they will love to look at, and 100 simple first words to learn, too. The pages are made from tough board for hours of fun reading, and the cover is softly padded for little hands to hold.