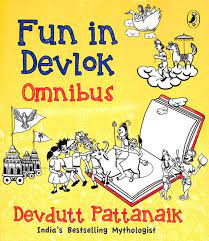 5
0%
0
4
0%
0
3
0%
0
2
0%
0
1
0%
0
Master storyteller Devdutt Pattnaik answers these curious questions and reveals many more secrets of the world of gods and demons in this delightfully illustrated omnibus, featuring all six tales in the Fun in Devlok series. Follow Harsha as he discovers the secret to happiness, listen to Gauri's fascinating conversation with a talking cow, play dumb charades with Shiva, find out why identity cards are important even for Krishna, join the fight between Kama and Yama and learn why the river Saraswati disappeared mysteriously.