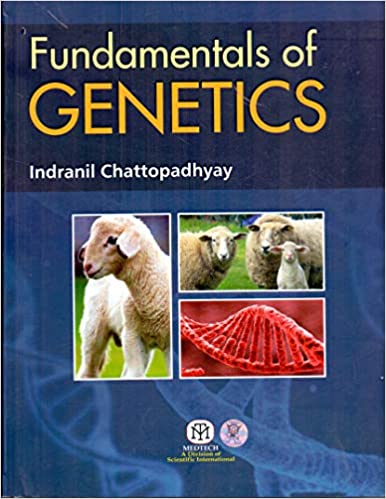 This book was initially written as a set of hastily scrawled class notes just to make the subject of Genetics understandable to the newcomers, Later it was neatly transcribe into a series of notebooks for exams preparation. Later Prof. J.J Ghosh, my all time teacher and whom I respect as my godfather, highly inspired me to give a final shape of all these notebooks. However, the ultimate leap to publication was provoked by innocent requests from so many students whom I taught as my son.

The purpose of the book has evolved since that time, and the aim of the following chapters is to provide and almost complete insight of important subject areas in transmission genetics, molecular genetics, and recombinant DNA technology, but at a level that is suitable for advanced undergraduates, postgraduate and beyond.

This book is therefore is not intended to be neither a beginner’s guide to molecular genetics nor as substitute for lectures, reviews and the established textbooks. It is meant to complement them and assist the reader to extract key information.

Indranil Chattopadhyay was born at district town, Midnapore, West Bengal and grown up at the village, Bhajanghat, district Nadia, West Bengal. He received his Bachelor of Science degree in zoology from Midnapore College, University of Calcutta and his Master of Science in Zoology from University of Calcutta in 1981. He earned his Ph.D. in Zoology from the same university in 1987. Immediate to receiving M.Sc. Degree the author trained himself in Microbiology for two years and published in 1987. Immediate to receiving M.Sc. Degree the research job at the Organon Research Central Kolkata, as Senior Research Scientist where he performed antiparasite protozoan drug research. Dr. Chattopadhyay is the author of many scientific papers resulting from research funded by U.G.C. and Z.S.I.
No Review Found