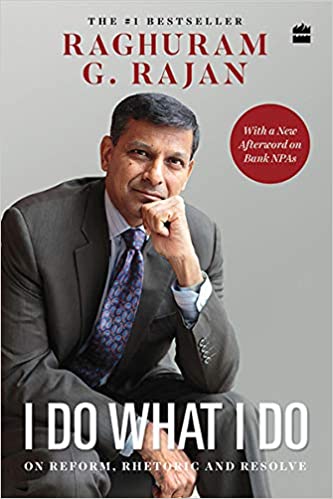 I Do What I Do: On Reform, Rhetoric and Resolve

When Raghuram G. Rajan took charge as RBI Governor in September 2013, the rupee was in free fall, inflation was high, India had a large current account deficit, and exchange reserves were falling. As every measure failed to stabilize markets, speculators sensed a full-blown crisis. Rajan's response was to go all out, not just to tackle the crisis of confidence, but also to send a strong message about the strength of India's institutions and the country's ongoing programme of reform..Rajan's commentary and speeches in I Do What I Do convey what it was like to be at the helm of the central bank in those turbulent but exciting times. Whether on dosanomics or on debt relief, Rajan explains economic concepts in a readily accessible way. Equally, he addresses key issues that are not in any banking manual but essential to growth.I Do What I Do offers a front-row view into the thinking of one of the world's most respected economists, one whose commitment to India's progress shines through in the essays and speeches here.

Raghuram G. Rajan is a professor of finance at the University of Chicago. He was the Governor of the Reserve Bank of India between 2013 and 2016 and also served as Vice-Chairman of the Board of the Bank for International Settlements. Dr Rajan was the Chief Economist and Director of Research at the International Monetary Fund from 2003 to 2006. Dr Rajan co-authored Saving Capitalism from the Capitalists with Luigi Zingales and wrote Fault Lines: How Hidden Fractures Still Threaten the World Economy, for which he was awarded the Financial Times-Goldman Sachs prize for best business book. In 2003, Dr Rajan received the inaugural Fischer Black Prize for the best finance researcher under the age of forty. Other awards he has received include the Deutsche Bank Prize for Financial Economics in 2013, Euromoney’s Central Banker of the Year Award 2014 and The Banker’s Global Central Banker of the Year award in 2016.