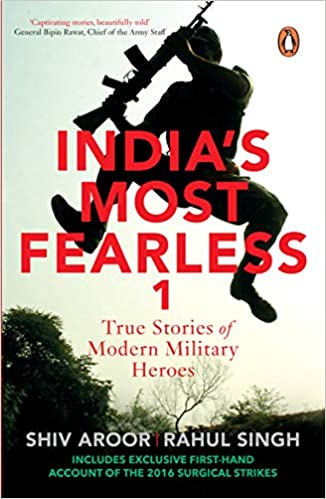 The Army major who led the legendary September 2016 surgical strikes on terror launch pads across the LoC; a soldier who killed 11 terrorists in 10 days; a Navy officer who sailed into a treacherous port to rescue hundreds from an exploding war; a bleeding Air Force pilot who found himself flying a jet that had become a screaming fireball . . .

Their own accounts or of those who were with them in their final moments.

India’s Most Fearless covers fourteen true stories of extraordinary courage and fearlessness, providing a glimpse into the kind of heroism our soldiers display in unthinkably hostile conditions and under grave provocation.

Shiv Aroor is an editor and anchor with India Today television, with over a decades experience covering the Indian military. He has reported from conflict zones that include Kashmir, Indias North-east, Sri Lanka and Libya. For the latter, he won two awards for war reporting. Aroor also runs the popular award-winning military news and analysis site Livefist, on which he frequently tells the stories of India’s military heroes.

Rahul Singh has covered defence and military affairs at the Hindustan Times for over a decade in a career spanning eighteen years. Apart from extensive and deep reporting from the world of the Indian military, including several newsbreaks that have set the national news agenda over the years, Singh has reported from conflict zones including Kashmir, the North-east and war-torn Congo
No Review Found
More from Author