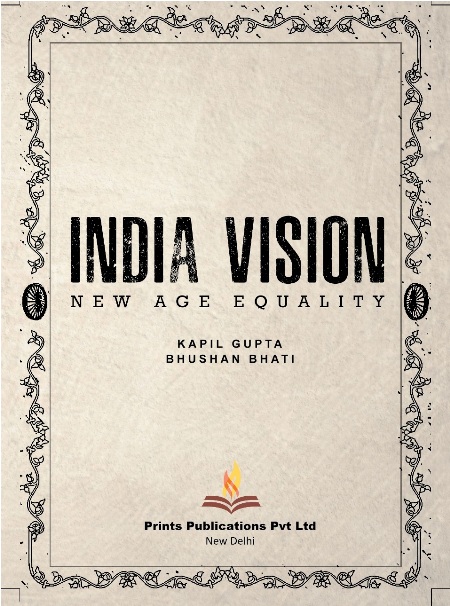 Equality, a fickle concept. What is equality for you? Kapil's concept, 'New Age Equality doesn't offer anybody special privileges or give reservations or subsidies or special rights just because some great great grandfather was oppressed when some king was ruling. New Age Equality doesn't give e a pedestal based on the whims or fancies of whichever mob you might belong to. Simply put, New Age Equality is an equal opportunity for all.

This book will challenge your concepts of equality and your concepts of India. Kapil deeply explores India and what it means for different people. Is it the land or the people; if it's the people, then which people?  Who defines and completes India?

As you read through this book, some of this will get answered and what doesn't get answers will remain as an enquiry for the readers to define for themselves. And that's the beauty of it. You get to define it for yourself.

A marketeer to the core, Kapil Gupta is an entrepreneur, both in thought and in style who believes that the power of a message & its delivery is what causes true revolutions. Kapil Gupta is a parallel entrepreneur who believes in providing true meaning to the various organizations he runs and builds them in sync with one another. He jokingly calls himself the jack of all trades and a master of some. He is the Founder and the CEO of OMLogic (India’s leading digital marketing agencies), PragatiE (a virtual exhibition platform), Frontlist (portal for the publishing industry), Solh (a mental wellness platform & his current passion project), Advit Toys (a board games company). Kapil is a true believer in new-age equality, which for him is deep-rooted in providing equal opportunity to all. He believes that the current world of equality is still a 20th century way of working, which is rotten with personal benefits in the forms of subsidies & reservations (women, LGBTQ, religion, race, caste, region based). For true equality, everybody MUST be treated equally. Period. This has put him quite at odds with what he calls as the current brand of pseudo-feminists, pseudo-liberals and pseudo-social-activists. The liberals find him too conservative and the conservatives find him too liberal, yet he doesn’t associate himself as a centrist at all. For him, the classification in the current world has gone awry and a new brand of ideologies has to appear. Kapil runs a weekly video programme called ‘Truth Shots with Kapil’, where he delves deeper into the various topical or everyday social issues. Uninspiringly yet comfortably dressed in shorts, t-shirts and floaters, Kapil hates to dress-up for almost any occasion. A person who enjoys a fine scotch on the rocks, you are always welcome to have an argument, but make sure you have some time in your hand cause he might get really passionate about his cause. It’s not even a joke!

A born critic, Bhushan has been analyzing things since he was 10. A 22-year old journalism graduate, you might wonder what he knows about the world & you will be right, not much, but enough to make a difference. His ability to simplify things gives him an edge when it comes to communicating with the masses. A behind the doors activist, the reason why he has authored this book is because he believes in unlearning. Another reason why he chose to work with Kapil is because they seldom agree on anything, which is why they have been able to fine tune this book. A debater of sorts, Bhushan is known to never back down from an argument, no matter how heated it may get, provided that he knows what he is speaking about, because do keep in mind that he is still learning. His experiences in life have been starkly different than anybody else, an entrepreneur at 13, he built a business from scratch when most kids were just playing video games, and surprisingly in the field of video games. A communicator and a people’s person, he is currently working as an EA to Kapil and hopes to delve into the world of public policy once he has grown enough, both in terms of knowledge and understanding.
No Review Found
More from Author