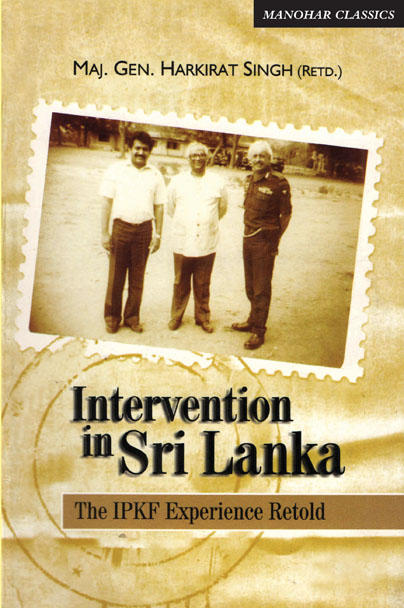 In this volume the author, the then GOC, Indian Peacekeeping Force (IPKF) gives a first hand account of the initial induction and operations of the IPKF in Sri Lanka. He describes the trials and tribulations of the IPKF as it grappled with an operational situation inexorably tangled with politics.

The book gives an insight into how inadequately prepared the IPKF was for the task set out for it and explains how difficult it was to fight the LTTE guerrilla, especially when the Indian government itself was not clear about its political and military aims. It highlights the operations of the IPKF in Sri Lanka and attempts to set the record straight on a number of key issues, including the surrender of arms by the LTTE, and the famous ‘boat tragedy’.

The IPKF went in as peacekeepers, with the responsibility to disarm the LTTE, if necessary by force, and maintain law and order. But clear-cut orders regarding possible IPKF action against the LTTE were never issued. Therefore, when the time came to fight the LTTE the IPKF found itself at a disadvantage. This compelling narrative is an important addition to the extensive literature on the IPKF in Sri Lanka.

Harkirat Singh was born in Lahore and commissioned in the Brigade of the Guards, Indian Army in June 1956. He saw active service during the Indo-Chinese conflict of 1962 in the Eastern Sector and later in the Indo-Pakistan conflicts of 1965 and 1971. He was appointed GOC, IPKF in Sri Lanka in July 1987. He graduated from the Defence Services Staff College, Wellington, later he attended the Joint Services Staff College in the UK. During his 35 years in the Indian Army he held various Command and Staff appointments. He was also the Indian Military Adviser in Yugoslavia, Romania and Italy from 1977 to 1981. He commanded the first Anti-Tank Missile Battalion during the Indo-Pakistan conflict of 1971 which for its pivotal role was awarded the Battle Honour of Chhamb in the NW Sector and other gallantry awards.
No Review Found