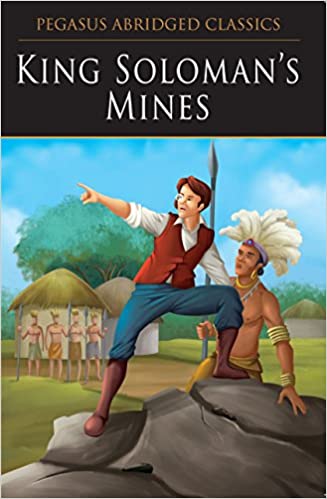 H.G. Wells, the author of The Time Machine is also known as the father of science fiction. This novel inspired many other time travelling story and movies henceforth. Story provides an imaginative, adventurous, thrilling experience for our young readers and illustrations help to form a connection with the story and understand it better.

Sir Henry Rider Haggard was an English writer of adventure novels set in exotic locations, predominantly Africa. One of the best-selling novelists of the nineteenth century, his stories continue to be popular and influential to this day and age. King Solomon’s Mines was Haggard’s breakout novel. Written in six weeks on a bet, Haggard had almost sold the manuscript to a publisher for a paltry 500 pounds. At the last minute, he insisted on 10 percent of the royalties, which set him up for life. King Solomon’s Mines is considered the first of the Lost World genre and has inspired dozens of adventure stories, including Edgar Rice Burroughs’s Tarzan books and the Indiana Jones movies. Haggard wrote over 50 novels. He was made a Knight Bachelor in 1912 and a Knight Commander of the Order of the British Empire in 1919. The locality of Rider, British Columbia, was named in his memory.
No Review Found
More from Author