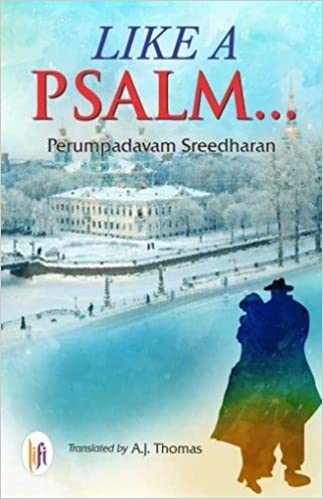 Like a Psalm... is the translation of the Malayalam novel Oru Sankeertanam Pole by the renowned novelist Perumpadavam Sreedharan, based on the events of a crucial month in Fyodor Dostoevsky’s life, unfolding in sixteen chapters. He is tricked by the publisher Stellovsky into signing a contract that would have compelled him to forfeit the royalties of all his works if he hadn’t completed a novel and handed it over in one month’s time. As he finds it impossible to finish actually writing the novel, The Gambler, in the prescribed time, he employs the twenty-year-old Anna as his stenographer. Dostoevsky, a hard drinking gambler and a pathetic epileptic, is quite a handful for the young Anna. Finally, she learns to love the writer unconditionally, to the point of deciding to marry him; her presence of mind saves the situation. Like a Psalm... has made publishing history in Malayalam – it has run into more than eighty editions till date, since its publication 24 years ago in 1993, with more than 2,50,000 copies sold, which is a record in Malayalam literature. The novel has won several prestigious awards, and has been praised by critics, scholars and eminent personalities.

Perumpadavam Sreedharan a fulltime fiction-writer screenwriter, with more than 25 titles to his credit; a winner of the Kerala Sahitya Akademi Award, Vayalar Award and many other awards and honours, he has reached the pinnacle of glory as Oru Sankeerthana Pole emerged from his pen .He was formely the chairman of Kerla Sahitya Akadem. He has also been an office berer of front -ranking writers organization

An Indian English poet, fiction writer and translator. He was Editor of Indian Literature, and is guest Editor Now. Taught English in Benghazi University, Ajdabiya Branch, Libya from 2008 to 2014.Hid contributions includes Germination (poetry,1989), Aagami Pal Ka Nirman(His poertry in Hindi Translation-2010), and more than 20 translated and edited works, besides several anthology appreances in international publications . A recipent of Katha Award, AKMG Prize(1997) and Vodaphone Crossword Award (2007). He was Senior Consultant at IGNOU.
No Review Found