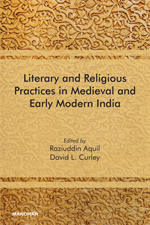 Literary and Religious Practices in Medieval and Early Modern India

Covering the history of medieval and early modern India, from the eighth to the eighteenth centuries, this volume is a part of a new series of collections of essays that would publish latest research on all aspects of politics, society, economy, religion and culture. The thematically organized volumes will particularly serve as a platform for younger scholars to showcase their new research and, thus, reflect current innovative thrusts in the study of the period. Established experts in their specialized fields are also being invited to share their scholarship and provide fresh perspectives. The geographical limits will be historic India, roughly corresponding to modern South Asia and the adjoining regions.

Chapters in this first volume of the series cover a wide variety of connected themes of crucial importance to the understanding of literary and historical traditions, religious practices and encounters. They explore a range of practices that made it possible for literary and religious texts to be created, to be circulated, and to shape beliefs, sentiments, and institutions. Several chapters discuss writing practices in the context of religious identities and boundaries; yet others analyse vernacular genres with a religious dimension, and their use as sources for contemporary history. The volume as a whole addresses present-day concerns and tensions between professional-academic history writing and faith-based accounts and narratives deployed in identity-politics and ideological contestations.

Raziuddin Aquil is associate professor, Department of History, University of Delhi. He was previously Fellow in history, Centre for Studies in Social Sciences, Calcutta. He is the author of Lovers of God: Sufism and the Politics of Islam in Medieval India (2017) and Sufism, Culture and Politics: Afghans and Islam in Medieval North India (2007) and co-editor, with Partha Chatterjee, of History in the Vernacular (2008).