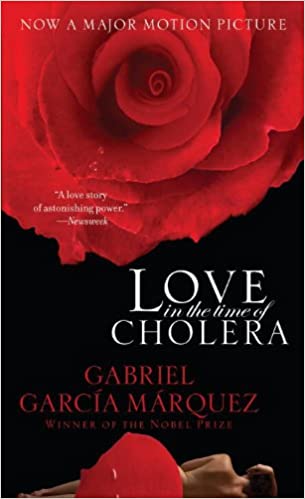 Love In The Time Of Cholera

Nobel prize winner and author of One Hundred Years of Solitude Gabriel García Márquez tells a tale of an unrequited love that outlasts all rivals in his masterpiece Love in the Time of Cholera.

'It was inevitable: the scent of bitter almonds always reminded him of the fate of unrequited love'Fifty-one years, nine months and four days have passed since Fermina Daza rebuffed hopeless romantic Florentino Ariza's impassioned advances and married Dr Juvenal Urbino instead. During that half-century, Flornetino has fallen into the arms of many delighted women, but has loved none but Fermina. Having sworn his eternal love to her, he lives for the day when he can court her again.

When Fermina's husband is killed trying to retrieve his pet parrot from a mango tree, Florentino seizes his chance to declare his enduring love. But can young love find new life in the twilight of their lives?

'The most important writer of fiction in any language' Bill Clinton

As one of the pioneers of magic realism and perhaps the most prominent voice of Latin American literature, Gabriel García Márquez has received international recognition for his novels, works of non-fiction and collections of short stories. Those published in translation by Penguin include Autumn of the Patriarch, Bon Voyage Mr.President, Collected Stories, Chronicle of a Death Foretold, The General in his Labyrinth, Innocent Eréndira and Other Stories, In the Evil Hour, Leaf Storm, Living to Tell the Tale, Memories of My Melancholy Whores, News of a Kidnapping, No-one Writes to the Colonel, Of Love and Other Demons, One Hundred Years of Solitude, The Story of a Shipwrecked Sailor and Strange Pilgrims.

Gabriel Garcia Marquez was born in Aracataca, Colombia, in 1927. He studied at the University of Botoga and later worked as a reporter for the Colombian newspaper El Espectador and as a foreign correspondent in Rome, Paris, Barcelona, Caracas and New York. He is the author of several novels and collections of stories, including Eyes of a Blue Dog (1947), Leaf Storm (1955), No One Writesto the Colonel (1958), In Evil Hour (1962), Big Mamas Funeral (1962), One Hundred Years of Solitude (1967), Innocent Erendira and Other Stories (1972), The Autumn of the Patriarch (1975), Chronicle of a Death Foretold (1981), Love in the Time of Cholera (1985), The General in His Labyrinth (1989), Strange Pilgrims (1992), Of Love and Other Demons (1994) and Memories of My Melancholy Whores (2005). Many of his books arepublished by Penguin. He was awarded the Nobel Prize for Literature in 1982. Gabriel Garcia Marquez died in 2014.
No Review Found
More from Author