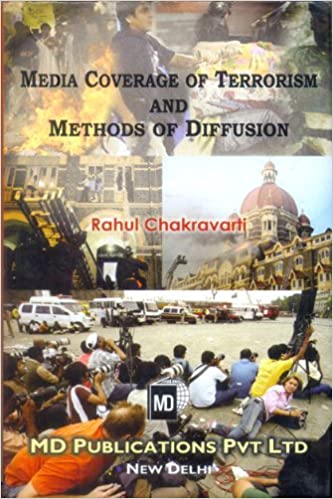 MEDIA COVERAGE OF TERRORISM AND METHODS OF DIFFUSION

The use of terrorism as a violent political strategy has been increasing steadily throughout the world during last few decades. It is therefore worthwhile to examine the role of media in relation to terrorism. The critical issues confronting media coverage of terrorism are examined in this book. Using specific terrorist activities, it analyzes the selective labeling of acts of political violence and the symbolic nature of the specific characterization. It also examines the implications of media coverage of acts of political violence for visual communication research. This interdisciplinary key on media coverage of terrorism is designed for professional and students of journalism, mass communication, criminal justice and political science. It is also appropriate for the related fields of psychology, sociology and criminology.

Rahul Chakravarti is a correspondent for nearly one decade. He has completed his post graduate in Mass Communication and Journalism from Ranchi University, Ranchi. His mission and passion of life is to bring the truth about the reason and effects of terror widespread around the world. He is featured on several documentaries and has appeared in the Media nationally and internationally. He has done explanatory reporting for several newspapers for coverage of global terrorism, and has received several awards for Human Rights Journalism. He is involved with many professional and community organizations in India and abroad.