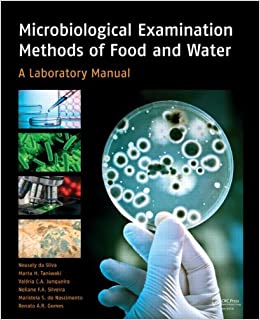 Microbiological Examination Methods of Food and Water: A Laboratory Manual

Microbiological Examination Methods of Food and Water is an illustrated laboratory manual that provides an overview of current standard microbiological culture methods for the examination of food and water, adhered to by renowned international organizations, such as ISO, AOAC, APHA, FDA and FSIS/USDA. It includes methods for the enumeration of indicator microorganisms of general contamination, indicators of hygiene and sanitary conditions, sporeforming, spoilage fungi and pathogenic bacteria.

Every chapter begins with a comprehensive, in-depth and updated bibliographic reference on the microorganism(s) dealt with in that particular section of the book. The latest facts on the taxonomic position of each group, genus or species are given, as well as clear guidelines on how to deal with changes in nomenclature on the internet. All chapters provide schematic comparisons between the methods presented, highlighting the main differences and similarities. This allows the user to choose the method that best meets his/her needs. Moreover, each chapter lists validated alternative quick methods, which, though not described in the book, may and can be used for the analysis of the microorganism(s) dealt with in that particular chapter. The didactic setup and the visualization of procedures in step-by-step schemes allow the user to quickly perceive and execute the procedure intended.

This compendium will serve as an up-to-date practical companion for laboratory professionals, technicians and research scientists, instructors, teachers and food and water analysts. Alimentary engineering, chemistry, biotechnology and biology (under)graduate students specializing in food sciences will also find the book beneficial. It is furthermore suited for use as a practical/laboratory manual for graduate courses in Food Engineering and Food Microbiology.

Dr. Neusely da Silva is a scientific researcher at the Food Technology Institute (ITAL), a government research agency of the state of Sao Paulo, Brazil. She graduated in Food Engineering and has a PhD in Food Science from the State University of Campinas (UNICAMP, Brazil). Director of the Microbiology Reference Laboratory of the Food Technology Institute from 1995 to 2007, she was responsible for the accreditation of the laboratory assays according to ISO 17025. She is author of over 70 publications in the field of Food Microbiology and her major research areas are bacterial physiology and methods for detection of bacteria responsible for food-borne diseases and bacteria responsible for food spoilage.

Dr. Marta Hiromi Taniwaki, PhD, is a scientific researcher at the Food Technology Institute (ITAL) at the Center of Quality and Food Science in Campinas, Brazil. She graduated in Biology and has a PhD in Food Science and Technology from the University of New South Wales, Australia. She is author of over 100 publications in the fields of Food Mycology, Mycotoxins and Food Microbiology. She has been a member of the International Commission on Food Mycology (ICFM) since 1997; a member of the Brazilian delegation at the Codex Contaminants in Food (CCCF) since 2006; a member of the International Commission on Microbiological Specifications for Foods (ICMSF) since 2010 and on the editorial board of Mycotoxin Research since 2012. Her major research areas are: fungi and mycotoxins in foods, biodiversity of toxigenic fungi in foods, fungal physiology and mycotoxin production, and a polyphasic approach to the biosystematics of the Aspergillus species.
No Review Found