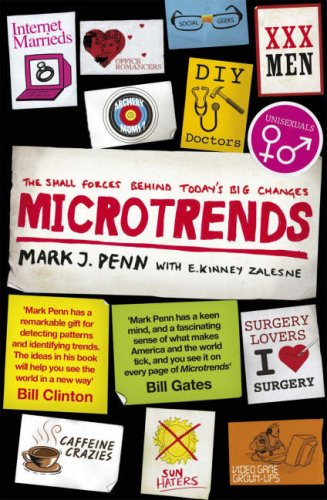 In Microtrends: The Small Forces Behind Today’s Big Changes, Mark Penn shows that 75 of the most important trends in the world today are the smallest ones. Exploring everything from politics to religion, food to entertainment, Penn follows the numbers to uncover what's really popular, not what we think is popular. Because while these trends are shaping the world, they’re relatively unseen – they’re under-the-radar forces that can involve as little as 1 percent of the population.

People have never been more sophisticated, more individualistic, or more knowledgeable about the choices they make in their daily lives. Yet it takes intensive, scientific study to find the logical patterns that underlie those choices. While helping you to refine your own trend-spotting skills, Penn pierces remarkably stubborn conventional thinking to find the counterintuitive trends that represent a portrait of society in the 21st century. A groundbreaking book about the way people think and how they act, Microtrends explores the practical implications of these 75 trends for politics, business, and society itself.

Mark J. Penn has spent over 30 years as an adviser and polling analyst to major corporations and heads of state. He has advised companies from Microsoft to BP and heads of state from U.S. President Clinton to U.K. Prime Minister Blair to others in Asia and Latin America. He started polling after graduating Harvard and attending Columbia Law School. Time Magazine has called Penn “The Master of the Message” and The New York Times has called him “The Guru of Small Things,” because of Penn’s unique ability to find and motivate niche groups in society. Penn is currently CEO of Burson Marsteller and Penn, Schoen & Berland Associates.
No Review Found