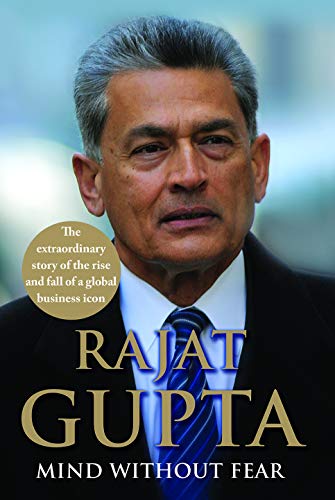 For nine years, Rajat Gupta led McKinsey and company – The first foreign-born person to head the world’s most influential management consultancy. He was also the driving force behind major initiatives such as the Indian School of business and the public health foundation of India. In 2011, Gupta was arrested and charged with Insider trading. Throughout his trial and imprisonment, he has fought the Charges and maintains his innocence to this day.In these pages, Gupta recalls his unlikely rise from orphan to immigrant to international icon as well as his dramatic fall from grace. And for the first time, he tells his side of the story in the scandal that destroyed his career and reputation. Candid, compelling and poignant, Gupta’s memoir is much more than a courtroom drama; it is an extraordinary tale of human resilience and personal growth.

Rajat Kumar Gupta was the leader of McKinsey & Company, Inc., from 1994 to 2003. He was also a board member of major corporations including Goldman Sachs, Procter & Gamble, and American Airlines and advisor to the United Nations, the Rockefeller Foundation, and the World Economic Forum. He served as chairman of the Bill & Melinda Gates Foundation advisory board, the Global Fund to Fight AIDS, Tuberculosis and Malaria, and the International Chamber of Commerce, and was the founding chairman of the Indian School of Business, the American India Foundation, and the Public Health Foundation of India. Born in Kolkata, West Bengal, in 1948, Gupta attended the prestigious Indian Institute of Technology Delhi and traveled to the United States to attend Harvard Business School in 1971. After graduating from Harvard, he joined McKinsey, where he would spend his entire thirty-seven-year consulting career, including his nine-year term as the firm's leader. During his final years with McKinsey and after his retirement, Gupta transitioned from business leader to business statesman, bringing his wealth of experience to bear on some of the most pressing global issues around public health and education. His philanthropic endeavors impacted the lives of millions, and the institutions he created still thrive to this day. In 2011, Gupta was charged with insider trading and found guilty. He was sentenced to two years imprisonment, which he served at FMC Devens in Massachusetts. Since his release in January 2016, Gupta has resumed his work in health and education, and added a new focus on criminal justice and prison reform. He lives in Connecticut with his wife, Anita, and is the proud father of four daughters and grandfather to four granddaughters.
No Review Found