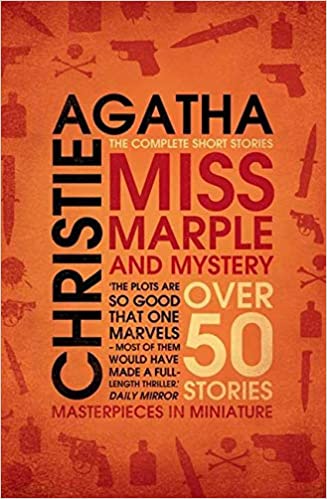 5
0%
0
4
0%
0
3
0%
0
2
0%
0
1
0%
0
Miss Marple and Mystery: The Complete Short Stories is a collection of short stories on the crime-solving skills and exploits of an elderly lady created by famous mystery author Agatha Christie. The stories are set in a small village in England. This book also contains other short stories as written by Agatha Christie, featuring no one in specific. Miss Jane Marple has been described as one of the most prominent characters in detective fiction. She has developed an astute sense of observation and deduction from her life in the small British village of St Mary's Mead. This book contains all the Miss Marple short stories in the chronological order that they were written in. These include stories from the famous Tuesday Club series. The stories involve Miss Marple solving every single baffling mystery being put in front of her by using her knowledge of basic human nature. Other short stories from Miss Marple's Final Cases and Two Other Stories have also been included in the book. This collection also contains several independent short stories written over the years by Agatha Christie. The most famous of these is The Witness for Prosecution, which was originally written as a play. Stories like The Listerdale Mystery, The Lonely God, The Actress, The Strange Case of Sir Arthur Carmichael and so on, have been compiled in this book. Miss Marple and Mystery: The Complete Short Stories was published by Harper in 2008 and is available in paperback. Key Features: The book contains short stories based on the crime solving methods of Miss Marple. Other independent short stories written by Agatha Christie are also included in this collection.