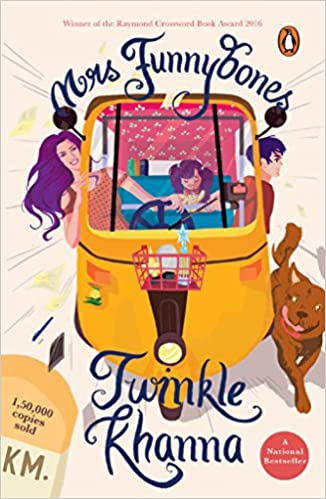 Almost everyone has a similar family story in India and this is what Mrs Funnybones or rather Twinkle Khanna pokes fun at. The husband who’s the “man of the house”, the crazy mothers in law, friends and of course the constant jibes at her weight make it an intriguing read. Everything comes together to leave the reader cackling away in laughter.

Dwell deeper because this book will certainly make you think

The tag line of the book, 'She’s just like and a lot like me” coupled with the celebrity author might make one wonder, how can one compare a normal Indian household life with the glamorous life of someone like Twinkle Khanna. But that is the beauty of this book. It is not entirely an autobiography of the author, nor is it the typical tell all that celebrities so often write. This is a book of a woman who is a mother of two, an ordinary version of the star and someone who finds humour in the everyday situations that women in India face every day. That is what makes the book relatable even though it has been written by someone who’s the daughter of celebrities and married to one. Through her own anecdotes and by drawing parallels between a star’s life and a normal life, she has managed to write a book which is funny yet at the same time it forces you to think and comment on the situation. Mrs Funnybones is a comical take on the life of modern Indian women.

Twinkle Khanna, aka Mrs Funnybones, crafts satirical stories and funny fables when she is not running a design business, selling candles or running in circles around her small but rather odd family. She narrowly escaped a gruesome tragedy when Bollywood tried to bludgeon her brain to the size of a pea, but she ducked at the right moment and escaped miraculously unharmed. She is a popular columnist and is a regular contributor to The Times of India and DNA After Hrs. Currently, she is in the process of creating lame jokes like, ‘Why do all Hindu boys worship their mother? Because their religion tells them to worship the cow.’ She firmly believes that nothing in life is sacred except laughter.
No Review Found
More from Author