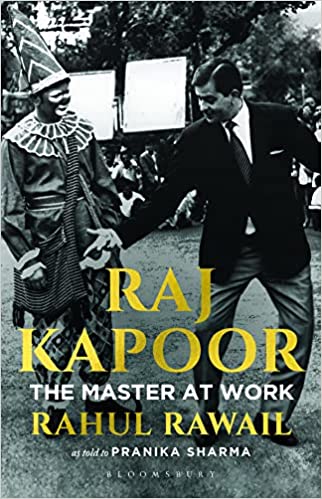 Raj Kapoor: The Master at Work

'If cinema did not exist, I would be non-existent.' - Raj KapoorIn this warm, thoughtful memoir, veteran filmmaker Rahul Rawail goes back to his days spent in R.K. Studios where he was nurtured and taught to handle the ropes of filmmaking from the Master himself-Raj Kapoor. Through storiesonly he can tell, Rawail delves not only into the techniques of the legendary filmmaker, but also into hitherto unknown aspects of Raj Kapoor's eccentric personality-his quirky sense of humour, his insights into life, the relationship he shared with his crew and his associations with artists of three generations.The book also examines how the lessons he learnt under the tutelage of Raj Kapoor carried Rahul Rawail through directing his own blockbuster films including Love Story, Betaab, Arjun and Dacait. Raj Kapoor: The Master at Work offers unique insights into what it took for Raj Kapoor to be an exceptional filmmaker, with his understandingof human emotions, virtues of music and the art of visual storytelling. Within these pages, one sees behind the enigma who lived and breathed cinema, in his before-seen role as a teacher, mentor, parent and guru.

Rahul Rawail is an Indian film director who worked as an assistant director to Raj Kapoor and was closely associated with him for several years. He is known for directing films like Love Story (1981), Betaab (1983), Arjun (1985), Dacait (1987), Anjaam (1994) and Arjun Pandit (1999). He has also launched the careers of a few Bollywood actors like Kumar Gaurav and Vijeta Pandit in Love Story, Sunny Deol and Amrita Singh in Betaab, Paresh Rawal in Arjun (1985), Kajol in Bekhudi (1992), and Aishwarya Rai in Aur Pyaar Ho Gaya (1997). Currently the co-founder of Saga Fiction, a reading mobile app, Pranika Sharma started her journey into the world of publishing with a Bachelor's in English Literature. She worked in journalism and mass media before going to the UK to complete her Master's in Creative Writing.
No Review Found