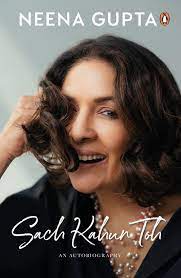 In Sach Kahun Toh, actor Neena Gupta chronicles her extraordinary personal and professional journey-from her childhood days in Delhi's Karol Bagh, through her time at the National School of Drama, to moving to Bombay in the 1980s and dealing with the struggles to find work. It details the big milestones in her life, her unconventional pregnancy and single parenthood, and a successful second innings in Bollywood. A candid, self-deprecating portrait of the person behind the persona, it talks about her life's many choices, battling stereotypes, then and now, and how she may not be as unconventional as people think her to be.

Neena Gupta is a two-time National Award-winning actor, filmmaker, producer and television personality. She started her career in Delhi's booming theatre scene in the 1980s but decided to switch to film and television after acting in the 1982 Academy award-winning Gandhi. She went on to star in several critically-acclaimed television shows such as Khandaan and Mirza Ghalib. She also worked extensively in art-house and independent films such as Mandi, Trikal and Jaane Bhi Do Yaaron. Neena has directed, produced and acted in several television shows including Saans, Siski and Son Pari. Her most recent works include award-winning performances in Badhai Ho, Shubh Mangal Zyaada Saavdhan, Panchayat and The Last Colour.
No Review Found