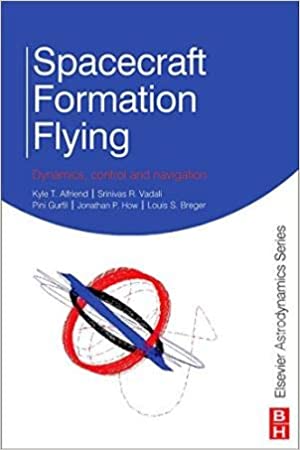 Spacecraft Formation Flying: Dynamics, control and Navigation provides a comprehensive treatment of the subject in a widely accessible fashion. The text fills an important void and the authors have utilized the advantage they enjoy, being among the leaders in researching this subject, to write an authoritative exposition. The result is an up-to-date text that will be broadly useful to academics and professionals in governmental and industrial research.

Dr. Terry Alfriend is currently the TEES Distinguished Research Chair Professor of Aerospace Engineering at Texas A&M University, where he was the Development Head for 1997 -2001. He is also a Visiting Professor at the Naval Postgraduate School. He is the member of the NAE, a Fellow of the AAS and AIAA and a member of the international Academy of Astronautics.

Dr. Srinivas R. Vadali has been a member of the faculty at Texas A&M University since 1986, where he is currently the Stewart & Stevenson- I Endowed Professor of Aerospace Engineering. He served on the faculty of Iowa State University from 1983 till 1985. He received his B.Sc. (Hons) in Mechanical Engineering from Sambalpur University, India, his M.E. (Distinction) in Aeronautical Engineering form the Indian Institute of Science.

Dr. Pini Gurfil is an Associate Professor of Aerospace Engineering at the Technion â€“ Israel Institute of Technology. He has published over 140 journals and conference articles in these area.