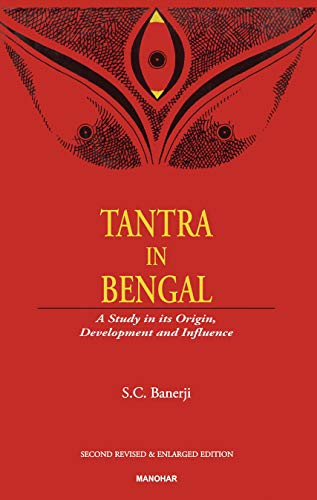 Tantra in Bengal: A Study in its Origin, Development and Influence

The work, the first of its kind, is a systematic study of Bengal Tantra and aims at giving a connected and sustained account of the origin, development and influence of Bengal Tantra. Besides a general account of the Tantra literature, it deals, in considerable detail, with the deep and wide influence of Tantra on the life and literature of Bengal. The work brings into bold relief the liberalisation of the conventional Brahmanical codes of conduct, and shows how the basic right to religion, denied through centuries to women and so-called ‘low-class people’ particularly the Sudras, were democratized by Tantra. The book studies the Tantra literature against the social and religious background of Bengal and highlights the judicious curbs placed by Bengal Tantra on self-indulgence which disfigures many Tantric rites.

The appendices contain useful information about unpublished Tantra literature of Bengal, Tantras mentioned in the Sanskrit works on Bengal Vaisnavism, Mudras, Yantras and Mandalas mentioned in Bengal Tantra, profiles of Tantric devotees and Buddhist Tantric works of Bengal. A glossary of Tantric terms has been appended in the book.

S.C. Banerji, a Retired Senior Professor of Sanskrit under Education Department of Govt. of West Bengal, and Ex-Secretary, Vangiya Sanskrit S’lksa Parisad, Calcutta, was a dedicated scholar of Indology. Winner of Rabindra Memorial Prize, the highest academic award of Govt. of West Bengal, Dr. Banerji published forty-three works on different aspects of Indology in English, Bengali and Hindi. Some of his works have earned international acclaim. His published works in English include A Brief History of Tantra Literature, A Companion to Sanskrit Literature, Indian society in the Mahabharata, Flora and Fauna in Sanskrit Literature, Dharmasutras, Kalidasa Apocrypha, Laments in Sanskrit Literature, The Castaway of Indian Society Folklore in Buddhist and Jain Literatures, etc.
No Review Found