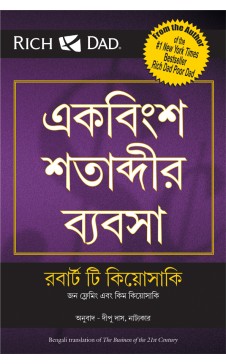 The Business of the 21St Century (Bengali)

The Business Of The 21st Century extols the virtues of network marketing as a business model that is ideal for the average person, to create streams of income.

Summary of the Book

The economy is in a downwards spiral the world over. Big businesses are failing, there is no job security, anyone might be laid off due to redundancy or restructuring, or any other dozen such reasons. It is a time of panic, frustration and anger.

Instead of spending time in fear and anxiety, and getting angry and trying to pin the blame on the government, the financial sector or someone else, The Business Of The 21st Century asks people to take charge of their affairs themselves.

Robert Kiyosaki, the successful creator of the Rich Dad series, tells readers that they can create income streams and assure financial security for themselves easily, by setting up their own business ventures.

The Business Of The 21st Century asks readers to use the power of network marketing. It says that this is the best way to create cash flow and passive income. Passive income is the kind of income that keeps coming, even when a person has stopped working. With network marketing, this is possible if the person puts in enough effort early on with a good business model, and if he creates a good team of marketers.

Network marketing allows a person to learn on the job, acquire new knowledge, and expand their horizons. All this can be done, while creating new businesses and networking with other people, who are also interested in building their own businesses.

Network marketing helps create leadership and collaboration skills. It harnesses the power of a network of people, whose efforts benefit each other. This business model is scalable and is ideal for creating residual or passive income, business that pays even after a person has stopped actively working on it. The business and the network that the person initially worked on setting up, continues to grow and pay well into the future. This is the true kind of asset, an asset that creates cash flows, says the author.

Robert Toru Kiyosaki is an American businessman and author. He was born on the 8th of April 1947. He is the founder of Global LLC and the Rich Dad Company. He is also popularly known as the author of the bestseller, Rich Dad Poor Dad. His works have challenged the way people think about money and investments. He discusses personal finance in depth via videos. His first work was published in 1997. Some of his recent works include Why the Rich are Getting Richer and More Important than Money.
No Review Found
More from Author