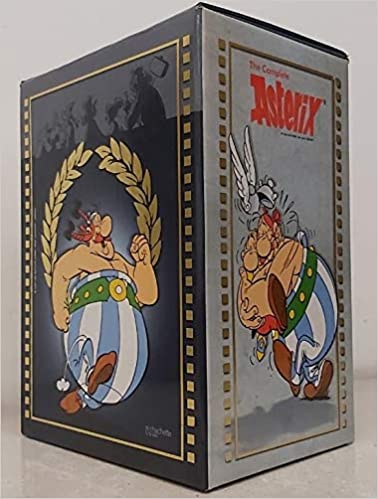 Placed end to end, the books would stretch twice around the Earth, and would weigh 12,900 tonnes (i.e. 400 lorries weighing 35 tonnes each.)

'If there's anyone who can simply transcend age altogether it's my first choice, the little Gaulish warrior called Asterix ... and despite the burden of expectations they don't disappoint ... It's a delight. And while the creative team in France has changed, we can be grateful that the English version remains in the incomparably skilled hands of Anthea Bell, who's translated the books with wit and energy since the very beginning' - Daniel Hahn, Independent

Albert Uderzo was born in 1927 in a small village in Marne, France. He met Rene Goscinny in 1951 and on 29 October 1959 their most famous creation, Asterix,made his first appearance on page 20 of PILOTE. ASTERIX THE GAUL, their first album, was published in 1961 and there have now been 35 Asterix albums. Illustrator Didier Conrad was born in Marseille in 1959. He moved to America after his style got him noticed by Disney and Dreamworks, and in 1996 he designed the characters and storyboard for the 2000 animated film THE ROAD TO EL DORADO.Jean-Yves Ferri lives in the AriÃ¨ge area of south-western France. Before writing the 35th Asterix album, he worked on the famous series Le Retour Ã  la Terre, as well as the adventures of a police officer named AimÃ© Lacapelle. Visit the English-language Asterix website at www.asterix.com
No Review Found
More from Author