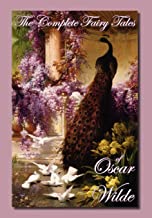 5
0%
0
4
0%
0
3
0%
0
2
0%
0
1
0%
0
The complete fairy tales of Oscar Wilde includes the two definitive story collections the happy prince and other tales (1888) and a house of pomegranates (1891). This volume collects exquisite and poignant tales of true beauty, selfless love, generosity, loyalty, brilliant wit, and moral aestheticism, such as "the birthday of the infanta," "The selfish giant," The Nightingale and the rose," and "the happy prince," among others.
A true classic of wonder for all ages.