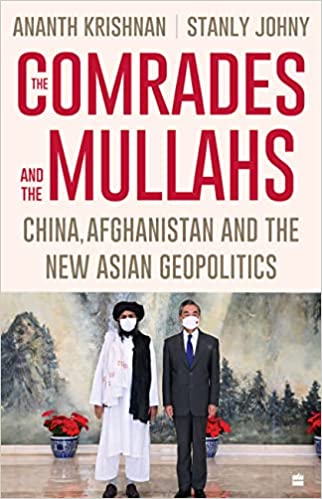 The Comrades And The Mullahs: China, Afghanistan and the New Asian Geopolitics

America's withdrawal from Afghanistan was a historical event that left a lasting impact on both Afghanistan's future and on Asian geopolitics. It also brought China into focus. This book traces the emergence of China as a key player in Afghanistan, and the evolution of China's Afghan policy with a focus on its relations with the Taliban. This emergence amid the US exit is a potentially game-changing development for the region, even if questions remain about Beijing's appetite to step in to fill the void and the limits of its ambitions.

The book will examine what Beijing's interests are and the drivers of its foreign policy, and specifically how its new Silk Road project, the Belt and Road Initiative (BRI), is shaping China-Afghan relations. It will delve deep into the evolution of the BRI and how Afghanistan has emerged as a key focal point on the corridor heading west from Xinjiang. The book will also look at the Xinjiang factor, drawing on the authors' travels to China's western frontiers, as well as the internal dynamics that are pushing Beijing's westward march. It will examine the rise of the East Turkestan Islamic Movement and the terror groups that are leading to an increasingly securitized approach to China's western regions and beyond, including with possible Chinese plans to deploy special forces along the China-Afghan border areas in the Wakhan corridor and Badakhshan region.

China's Afghan engagement is also deepening the 'all weather' alliance between China and Pakistan, with Beijing increasingly leaning on Islamabad, particularly in its outreach to the Taliban and elements in Afghanistan long supported by the Pakistani state, a perennial source of tension between Islamabad and Kabul. The book will look at how both countries are approaching the Afghan issue and the implications for India, especially Kashmir.

Stanly Johny is the international affairs editor at The Hindu. He is a regular contributor on Middle Eastern geopolitics to The Hindu, The Hindu Business Line and Frontline. His writings and analyses have been featured in other print and broadcast media as well as global think tank forums, including Economic and Political Weekly, Business Standard, The Gulf Today, Middle East Institute, Institute for Defence Studies and Analyses, TV18 and Asianet. A PhD in West Asian studies from Jawaharlal Nehru University, Stanly teaches critical international issues at Asian College of Journalism, Chennai. He lives in Chennai with his wife and daughter.
No Review Found
More from Author